The list of miners in Awesome Miner can be organized using the group concept to make it easier to find miners. By default a single group My Miners is defined, but any number of groups can be added.

The illustration belows shows two groups with two miners in each group. 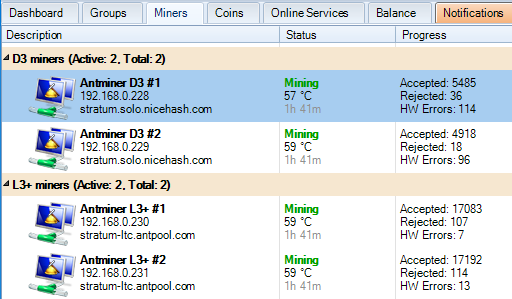 To add, edit or remove a group, right click on one of the groups and select one of the commands in the Groups menu.

By default all new miners are added to the predefined group My Miners. This can be changed by right clicking on another group and selecting Groups -> Make default group.

There are two ways of moving miners from one group to another:

A Miner Group can have one or several sub groups. A sub group only contain miners, not groups. There can only be top level groups and sub groups, not more level of groups. A miner can only belong to one single group (either a top level gorup or a sub group).

Where groups can be used