Awesome Miner can run benchmarking for CPU and GPU mining, based on the defined Profit switching profiles. The purpose of the benchmark is to update the profiles with the correct hashrate for each algorithm, which is required for the profit switching feature to make correct decisions.

The benchmark feature is accessed by selecting a Managed Miner or Managed Profit Miner in the main window of Awesome Miner, and click the Benchmark button in the Tools toolbar. The benchmark can be used for both local and remote miners.

The benchmark is performed on a single GPU for GPU mining. Please note that the GPU index number may be different across different mining software. When running benchmarks on systems with mixed GPU types, a different GPU may have to be selected to match what the mining software is expecting. For systems with identical GPU's, no changes to the GPU selection is required.

When the benchmark has finished, the selected results can be saved to the Profit switching profile. To manually modify these settings later, go to the Options dialog, Profit profile section. 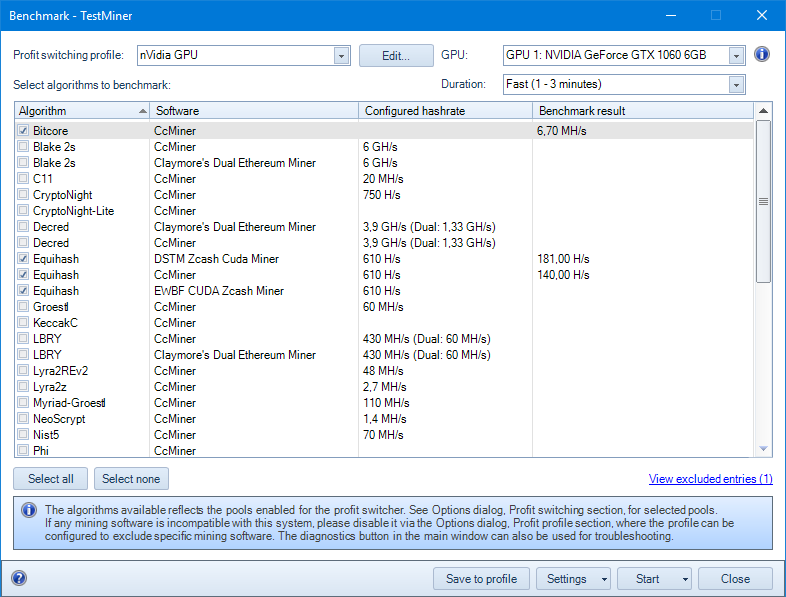 If all GPU's are identical, there is no need to define a Group profile for a miner. The profit switcher will make the same decisions no matter if one or many GPU's are used as long as they are identical.