Awesome Miner can perform GPU overclocking and GPU adjustments for both AMD and nVidia GPUs without any external applications.

Awesome Miner can change GPU settings, including GPU core speed, voltage and fan speed. The operations can be performed on a large scale - on many miners at the same time. This feature is available on all computers where Awesome Miner or Awesome Miner Remote Agent are running, and available without having to run any mining software.

The steps below describes the steps how to change the GPU settings for multiple Managed Miners.

Using the Profile button, the GPU clocking settings can be saved and loaded. The screenshot below illustrates the feature to save the current settings to a profile. Only the settings with a marked checkbox will be included in the profile. 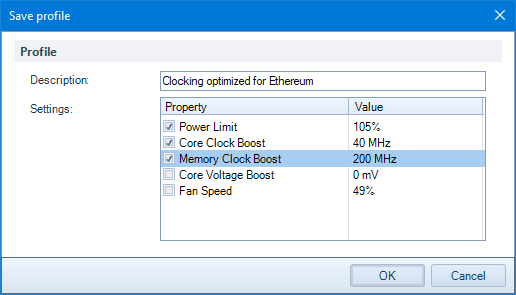 The profiles can also be used by Managed Miners, where a profile can be automatically applied when the miner is starting and/or stopping.

For Managed Profit Miners, the clocking operations can be set per algorithm in the Properties of the Profit Profile as illustrated below 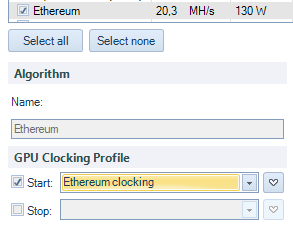 In the example below, one profile for overclocking of nVidia RTX 2080ti and one for nVidia RTX 2070 have been created. 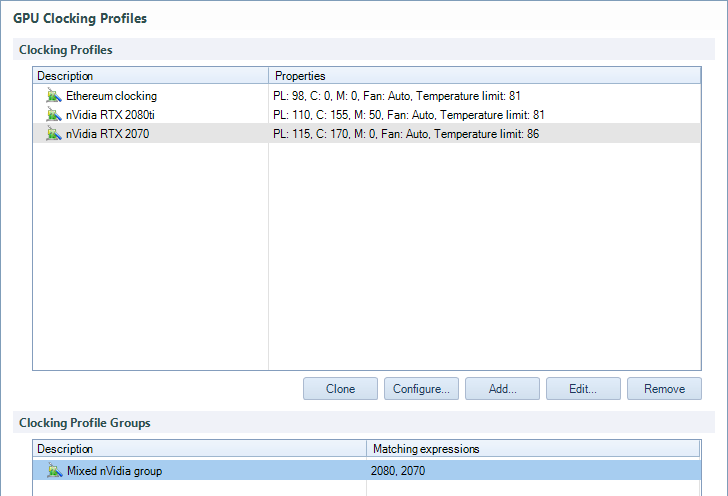 The group defines which profile to use for the different GPU's. Awesome Miner can either match the GPU to a profile based on the GPU ID or the GPU name. The example below uses an expression to match the GPU name with "2080" and applies the nVidia RTX 2080ti profile for the matching GPU's. In a similar way, another expression is used for all GPU's where the name contains "2070" where the nVidia RTX 2070 profile is used. 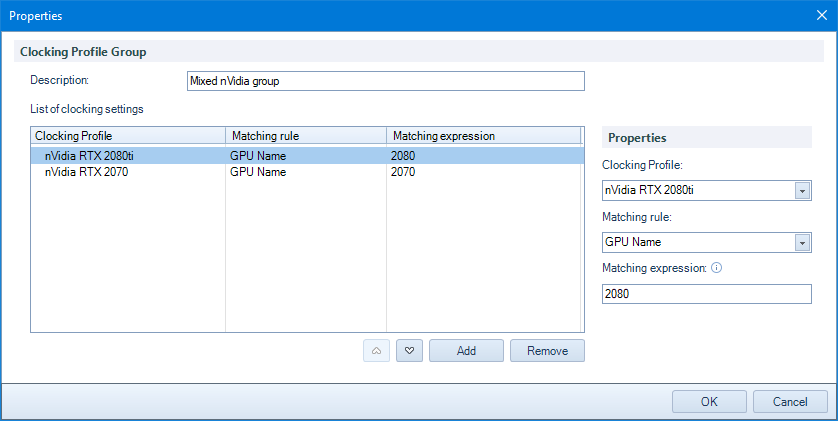 To match a single GPU ID or GPU name, simply enter the ID or name. The entered name will match on any part of the GPU name. Use comma to separate multiple items to match.

Awesome Miner and Remote Agent can monitor the temperature of each GPU and individually adjust the fan speed of each GPU to match the defined curve.

When enabled, all other fan configurations will be ignored. It will no longer be possible to manually configure the fan speed or set the fan speed via a Clocking Profile.

For AMD, these power usage values are typically lower compared to what an entire graphics card actually consume as the reported value only takes the GPU chip into consideration and not the entire card. The exact power consumption cannot be measured.

For nVidia, the power usage value are typically close to the actual power consumption.

To provide a better estimation of the actual power usage, the reported values can be increased with a specified percentage via the Options dialog, GPU Settings section.